Flexibility Makes Us a Customer Choice 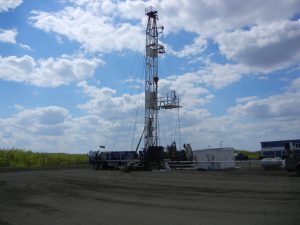 Royal’s niche is in the heavy oil and shallow gas sectors of eastern and northern Alberta and west- central Saskatchewan. The company maintains all of the auxiliary equipment required to service heavy oil wells to a depth of 2,500 meters, and shallow gas wells to pressures of up to 10,000 Kpa.

Royal’s customer base ranges from small independent producers to major heavy oil producers in Alberta and Saskatchewan near Lloydminster with a satellite operation based out of Peace River, Alberta.

“What makes us unique is that we are of a significant size, yet still independently owned. We are very flexible when it comes to meeting our clients’ needs.” This is a bonus to customers because you get an answer to questions quickly. There is not a bureaucracy to approve any changes in equipment or personnel, and so decisions are clear, local and typically prompt.

Incorporated as a private Saskatchewan company in 1997, Royal Well Servicing began oil well service operations with two service rigs operating out of Turtleford, Saskatchewan. Company owner Ken Parohl purchased his first service rig when there was a shortage of service rigs in the Lloydminster heavy oil sector. Parohl purchased the rigs in order to service oil wells that he owned at the time and he hasn’t looked back since.

Royal Well Servicing expanded its fleet to seven rigs in 1998, and became incorporated as an Alberta company that year. In 2001, Royal moved its head office to Lloydminster, Alberta. By the end of 2006, the company expanded its fleet to 12 single tubing/double rod rigs. It expanded further in 2012 with three slant rigs.

Royal has worked to be environmentally friendly for the past several years. In 2004, the company began implementing a “‘green” philosophy by converting its rigs and auxiliary components engines to electronic, low- emission diesel power. All subsequent additions to the fleet have followed this philosophy.

Talk to us, we want to hear from you!
Come by our office, call, or email.